Some thoughts, inspired by Reeperbahn Festival 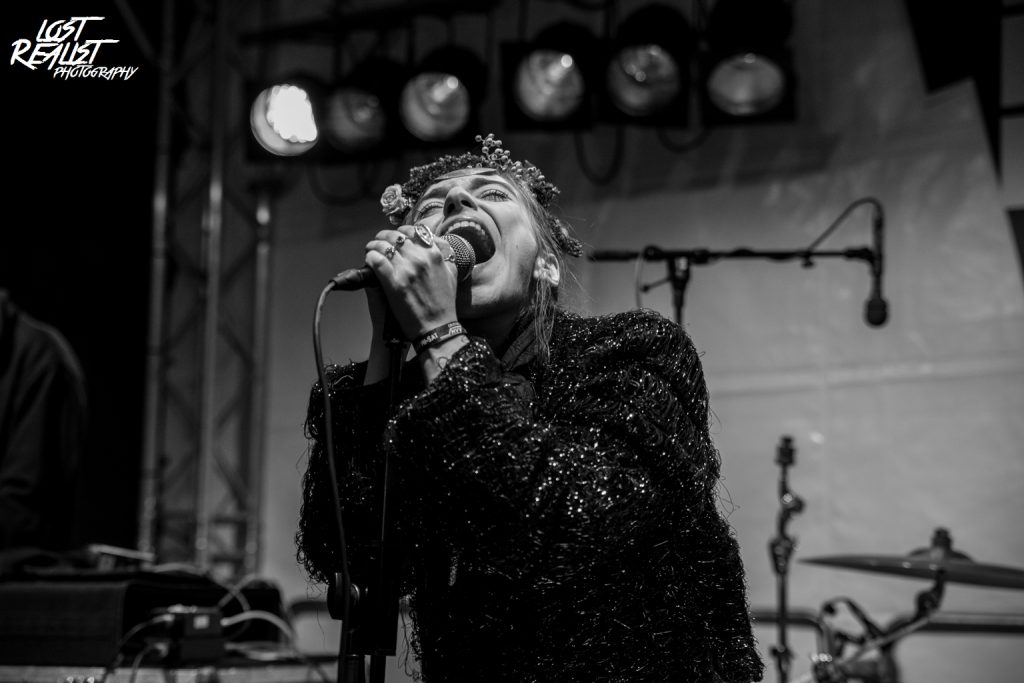 Hi there, I hope you’re all doing great. I’m back to my normal rhythms, after one very intense week, including two live shows, a trip to Hamburg for Reeperbahn Festival, much music, and many thoughts.

To start from somewhere, on the 16th of September, a new collaboration of mine was released. The song is called “So Real” and you can find it on all on-line stores and streaming platforms. Hiras and I wrote that song a while ago and I’m really happy to share it with you. He’s the producer I co-wrote “Golden Deer” with and let me say this, our working together doesn’t end here. I’m a sucker for his catchy, pop tunes & his inspiration is never-ending, so there shall be plenty more to come! His EP “So Real/Keep Breathing” was just released via The Sound Of Everything and I would highly recommend it if you’re a fan of well-done nostalgic synth pop.

A different show in Berlin.

Last Monday, I performed in Berlin at one of the most beautiful venues of the city. It’s called Gruener Salon (Green Salon). Everything in there is emerald-green. The curtains, the chandeliers, the seats. Given that my show would take place under such a classy roof, I have to admit I was very nervous. It’s a venue that’s somehow dictating you how to move or act, while in it. Imposing and atmospheric, special and with character, Gruener Salon’s stage gave me the chance to perform like at no other show. The guests were sitting during most of the show, which gave a completely different meaning to it. It occurred me later on, but that was no music gig. That was a performance show. Hopefully, all the nice people who joined me and my band for that evening, left that full-on green room smiling and entertained enough.

Whoever has seen me performing, whether that was with my old band or in my new pop outfit, they’re probably aware of my (almost intimidating, I’d dare to say) intensity, while I’m on stage. The set’s rolling and I show all my sides – from introverted to bubbly, from ecstatic to melancholic, from being a dark presence to smiling from ear to ear. I’m aware that my shows are no typical ones and if one’s expecting to see a band, they’re probably going leave disappointed. The show at Gruener Salon somehow helped realise who I am, what kind of art I’m making. And so, with these thoughts in my head, my team and I packed our stuff and drove to Hamburg, to attend and play this year’s Reeperbahn Festival. 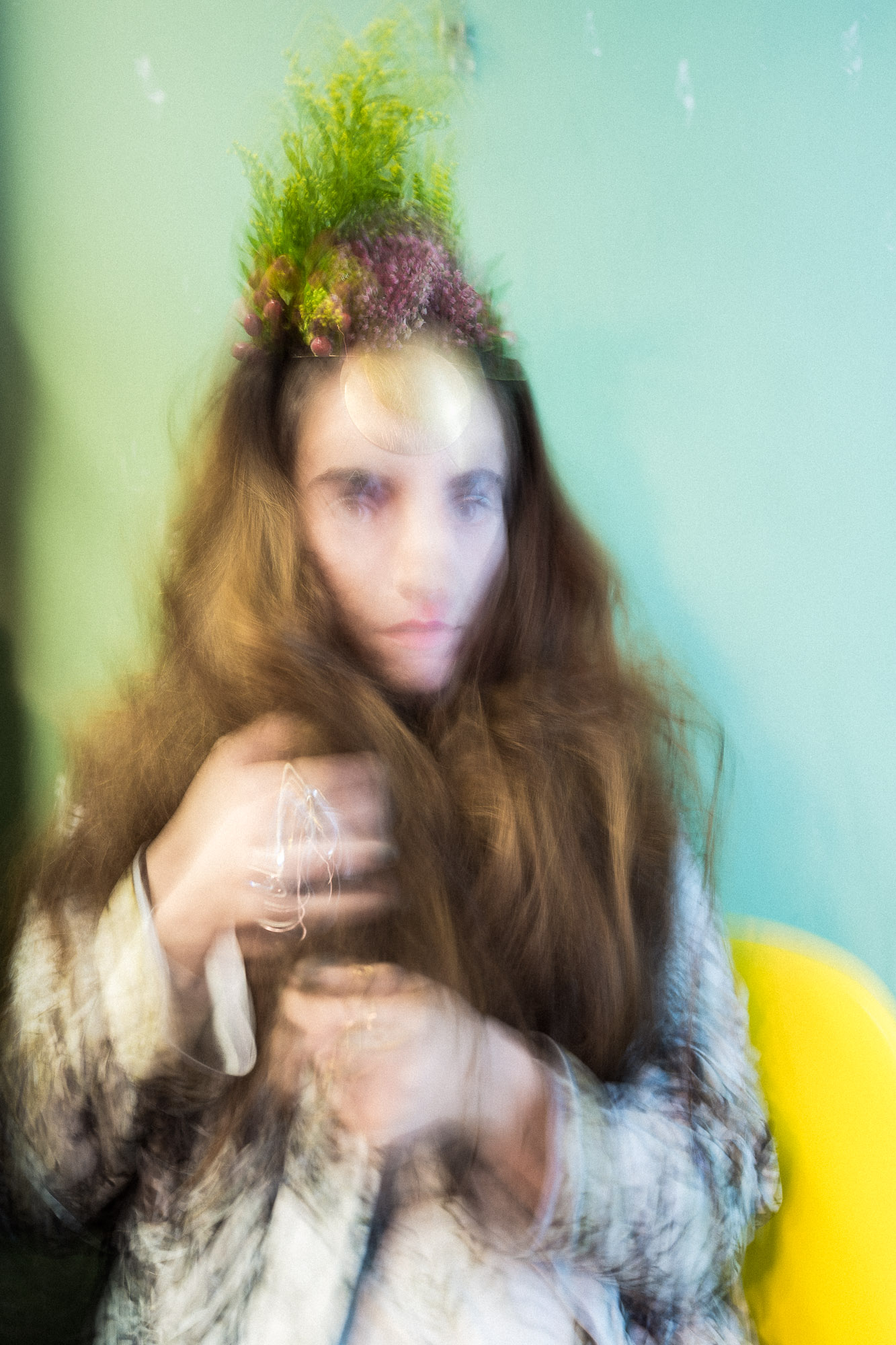 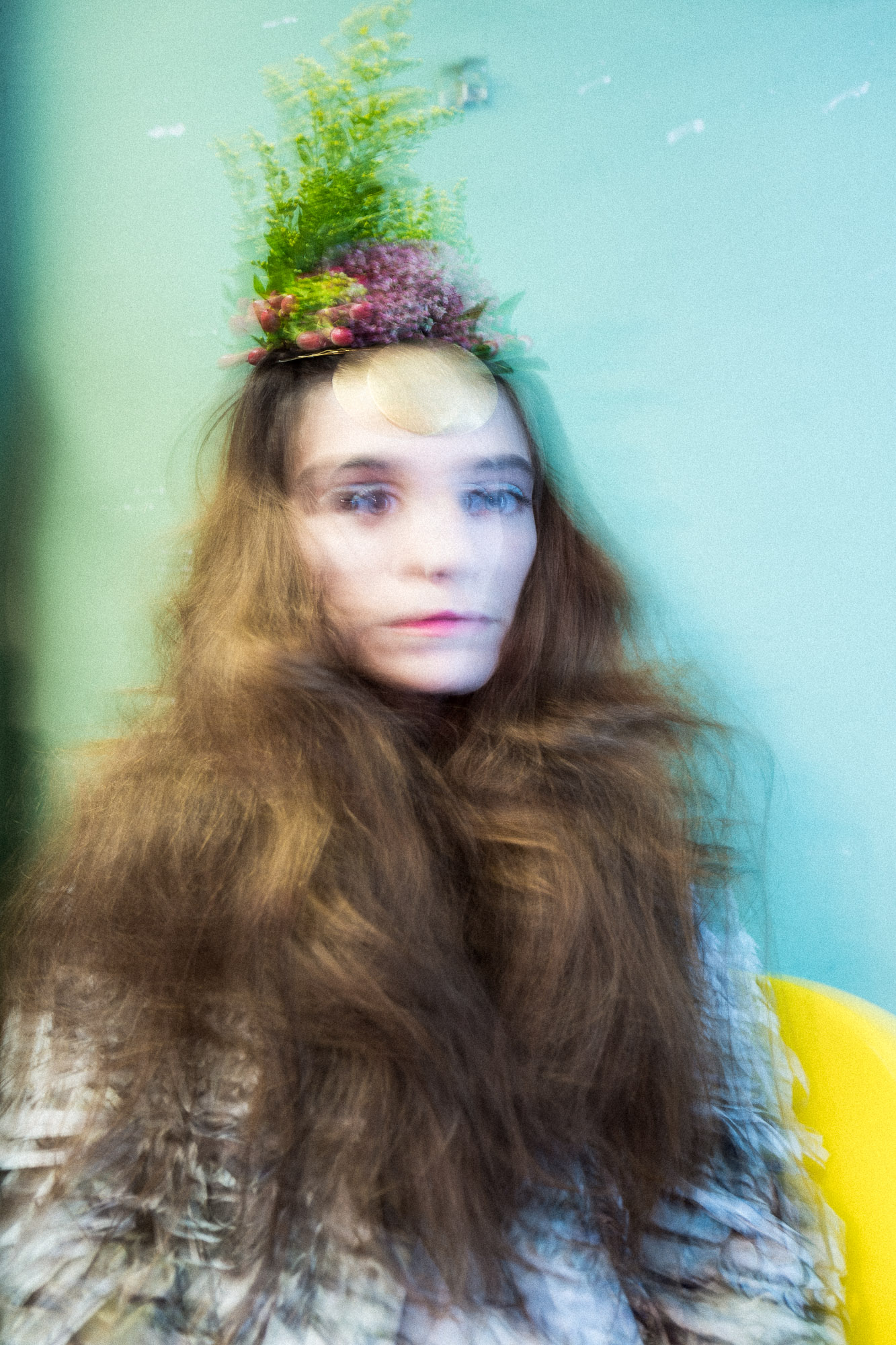 Reeperbahn Festival turned 11 years old. It’s a showcase and conference festival. It’s initially inspired by SXSW, but it’s executed in a European fashion. Among the music programme, there’re also films and arts shown – mostly to industry people, but also to locals, who, from what I heard, are waiting for this time of the year like the deserts for the rain. There’s also the NEXT conference running, which is focusing on world and humanity’s transformation through technology. Everything is compact. So many people running around. Reeperbahn Festival is a mix of indoors, outdoors and a city festival. Honestly, I have no idea how they do it, but they do it well. What arrives to the outside is an effortless production done by people who care for the visitors to have fun, while feeling safe and protected. I’d like to send a big shout out to all the people who worked at this year’s Reeperbahn Festival. They’ve been truly fantastic and, to my eyes, the best crew of all festivals I’ve visited both as an artist and as a fan.

My show was on Thursday at a semi-outdoorsy stage in Reeperbahn’s Spielbudenplatz. If you’ve never been to Hamburg and you plan to visit, you shall know that Reeperbahn itself is a very special district. It’s also been my first time there and although I like to brag that I don’t get that easily shocked, that’s the only place in the city where you realise it’s a Harbour town. Among a sea of sex shops, casinos, table dance clubs and sex workers who are trying to seduce the passengers at a price, while their pimps are watching over – among this sea of fast food love chains, bands & solo artists are playing shows one after the other, hoping their dreams will come true. I have to admit that this street co-existence with these beautiful women, whose eyes are sparkling hopes and dreams led me to a new term that’s summing up a music showcase setting, from the artist’s perspective: artists prostitution.

To clear up the air, Reeperbahn Festival is great – I’m not throwing any dirt or something similar. They’re amazing at what they’re doing and probably that’s the reason I feel like expressing my thoughts now, although I could have done this in the past. Reeperbahn Festival is one of the few industry events that strives for perfection and holds an open mind for feedback. That’s my feeling, at least.

Every artist and band is told that showcase festivals are their chance to get signed and booked. To perform at such stages is tough work. You’re most likely given 20 minutes to set your stuff on stage and check the sound. The nerves and the expectations intertwine, leaving you numb. But goodness, no! You’ve got no time for this! In most cases, this is your one and only chance to impress and convince of excellence. If you’re “lucky”, you’re maybe booked at another stage. “You’re given the opportunity to make the best out of it”. That means you’re not getting paid to play. Again, if you’re lucky, somebody pays for your travel costs and accommodation. Once you’re done with your shows, you’ll probably go back directly, because you can’t afford to stay longer. Of course, you also have to pay the people who accompanied you on this rather ambitious mission of getting the right partners on board. You go back home and you cross your fingers that good news will reach your ears. Long story short, playing these shows is an absolute investment of money, time and energy.

Thankfully, I was able to stay all the way, till the end of Reeperbahn Festival. I got a conference ticket, which I wouldn’t even consider, if, as an artist, didn’t have an off deal. By running around to catch panel talks, keynotes and networking sessions, I realised how much I’ve been missing out all these years. You see, nowadays, most festivals have (at least up to some extent) similar activities and presentations, but as I wrote above, it’s likely for the artists to have time pressure. They may have to leave right away to catch the next show or to go home. It’s often that, if you have a booking agent, he/she’ll try to “make the best out of it” and book some other shows in the region or nearby. The “best of it” means playing shows, when it could also mean to learn something new and to get educated on matters of the industry that, as an artist and with your music, you’re the centre of.

Are the artists the third wheel?

If I’m disappointed about something is that (and especially in those settings) the artists themselves are certainly not treated as the centre of the music industry. Better try to call them the “third wheel”. It’s also no news that the industry itself is on a big transformation towards something that nobody knows what it’ll be, although everyone acts as if they do. Given the opportunity to be part of discussions, posing questions and meeting with people knowledgeable in their fields gave me such inspiration and fresh thoughts. A new head, one would say. While outside of the conference rooms everyone acts like they’re important, behind the walls and the closed doors everyone is very considered, kept together and concerned about the future of the industry. New ways are suggested, new ways can be found, but us, the creators, the music makers are most likely to leave it all in the hands of our managers, label people and publishers. Fun fact, we could be there and form it all new. Or at the very least, be part of the change. I don’t know why the musicians are so left out. 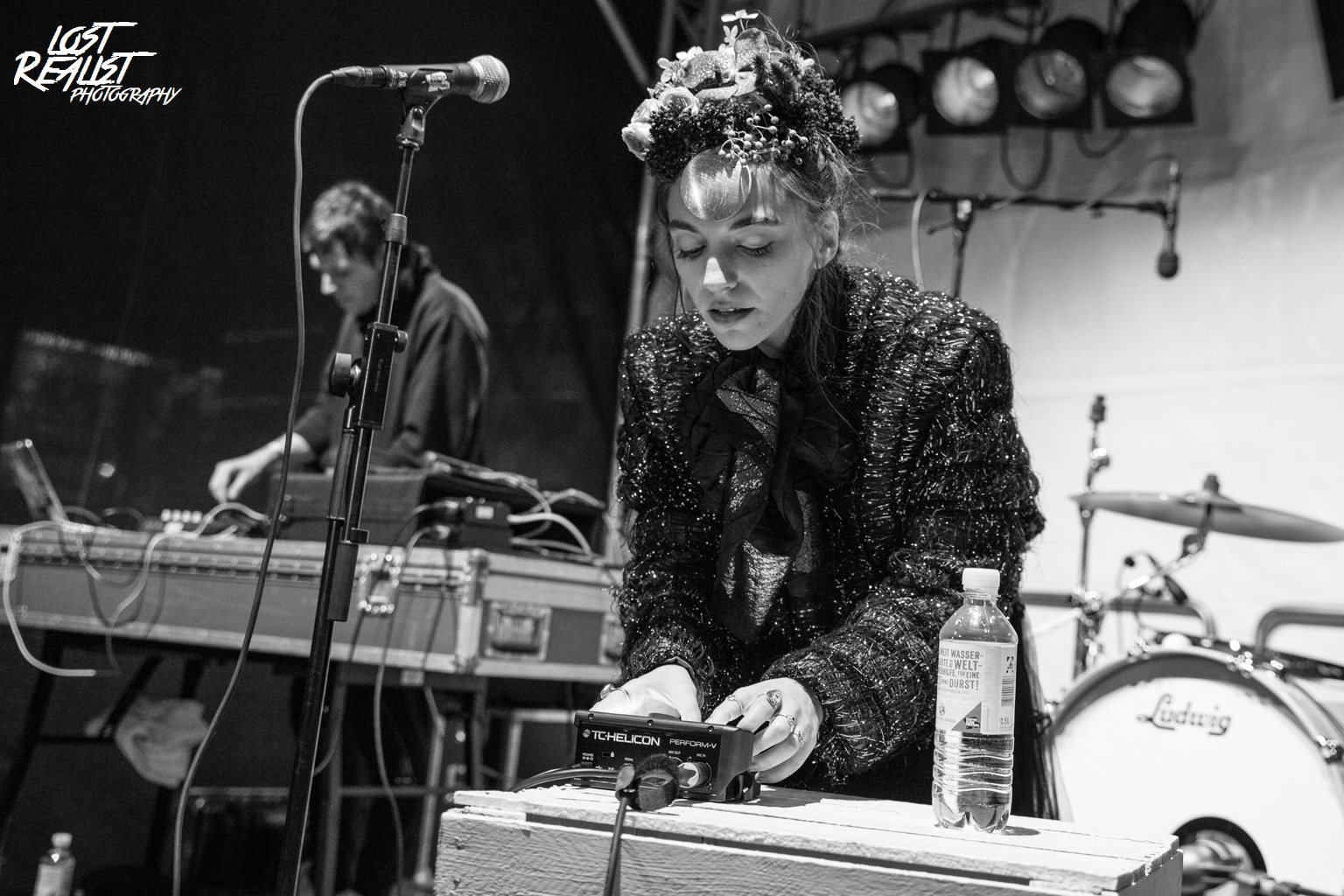 Caught in action – shows have become even more fun, now we’ve added some new toys! We need to put our best foot forward, after all. Photo by The Lost Realist during the Reeperbahn Festival performance.

You have no idea, how often I’ve been told that I’m the exception, being aware of the music industry and of my rights. Still, though, I have to admit that most of the people are looking at me with suspicion. They’re assuming I cannot talk about business because I’m probably… just an artist. I’ve heard managers talking about their bands as if they’re their toys, their bosses. Once you flip the coin, you’ll face far too many frustrated musicians. Some have no clue of what’s been happening with their music or the finances of their group. They don’t know what to do. It’s not that artists do not want to know about the mundane parts of the music business. It’s that they’re not encouraged to do so! It’s like the boys having to play with cars and the girls having to play with dolls. Everything else seems a taboo. But it’s 2016 and taboos are sort of irrelevant. So are stereotypes and conservatism.

I’ve seen people driven mad trying to fight for their rights. I’ve been one of those. During those times, I lost my sleep, my appetite, I lost my flair for life. Being independent is all cool and amazing, but it’s a full-time, hard job. What I’m missing from the music industry and scene is the artists being treated as more than just performers and writers.

Surely, it’s not all painted black. If the responsible people start calling artists at the festival panels, for instance. Not to sell records and success stories, but to speak their truth. Artists shall be encouraged to be part of the conference audience or of the networking sessions. Same with the music fans. They shall be encouraging them to see what’s behind the scenes. They shall be shown what’s happening when the lights are off. If all sides understand each other, the change will come so naturally, like a sea breeze. Being in the dark can make one lose their mind. I surely talk from a perspective. These industry events shall be an opportunity for all of us to meet and exchange views and ideas. We’re there, all in one place. Let’s connect!

To bring this to an end, I’d love to thank Reeperbahn Festival for triggering all these thoughts with their perfect organisation and openness. Showcase festivals could become the new age fairs – it would not be just the artists showcasing their work. Music experts could also showcase and share their knowledge with the rest of us. That’s my wish. I hope it comes true. 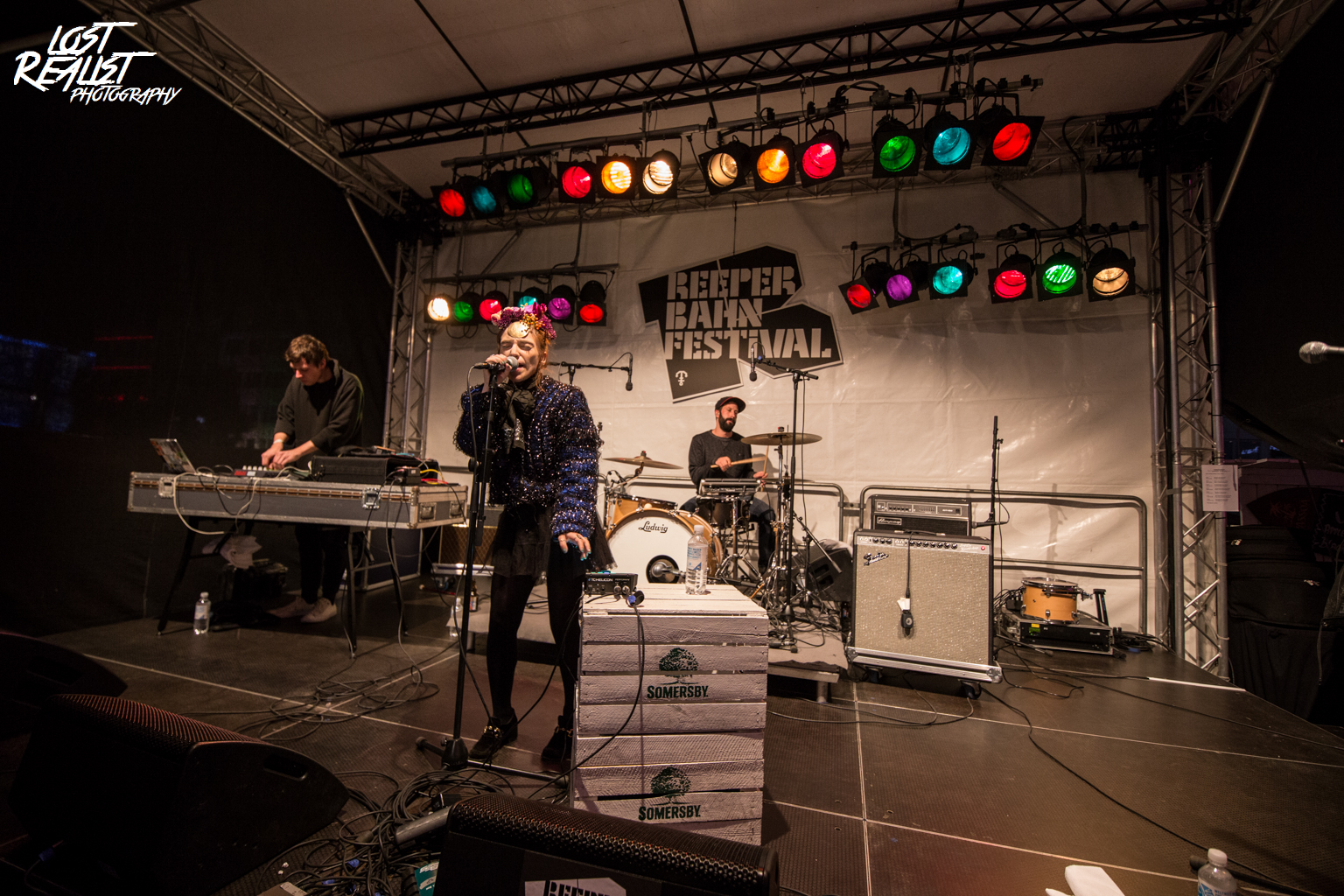 Band photo! Just a glimpse of how a Sarah P. live show looks like. Shot by The Lost Realist.

—-
Special thanks to Christoph Neumann & The Lost Realist for the great photos, Steinrohner for the great outfits, Loft Concerts, Sentric Music, and Hellbig Music. 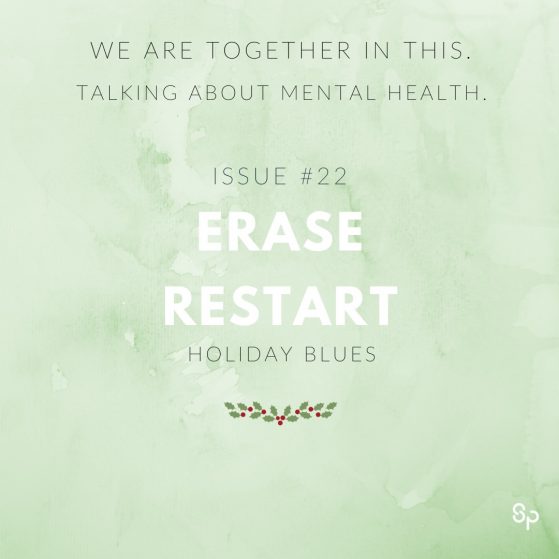